How to Cook Up a Disaster Audiobook Giveaway!

May is International Chick Lit Month. So to celebrate, I'm giving away 5 audiobook copies of How to Cook Up a Disaster, DIY Dating Book One! 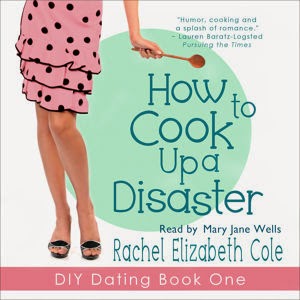 Sadie Dawson's mother goes into labor hours before her great-grandfather's 100th birthday party and Mom refuses to cancel the festivities. Now it's up to domestically-challenged Sadie to host the dinner party--only she hasn't a clue how to cook a turkey.

This could be the mother of all culinary disasters, but with the help of her two best friends, Sadie is determined to pull off the best dinner party in a hundred years. And maybe land Mr. Right, too.

Mary Jane Wells' effortless narration adds just the right dash of spice to this breezy chick lit romantic comedy. You might just have seen her in the films Elena Undone and Meth Head, or as Josie Marks in the HBO series The Newsroom, or caught her work on the Downton Abbey audiobooks.

The DIY Dating Series:
Book One: How to Cook Up a Disaster
Book Two: How to Knit a Tangled Mess
Book Three: How to Wallpaper a Catastrophe (coming 2015)


a Rafflecopter giveaway
Posted by Rachel Cole at 16:35